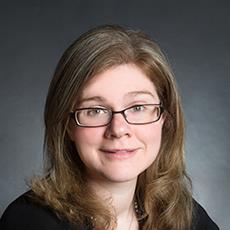 Amy Kotlarz Knapp began as a digital media specialist at Common Ground Health in March 2015. An award-winning reporter, she covered regional news for 14 years with a particular focus on health issues. Prior to starting at Common Ground Health, she worked for eight years at the Catholic Courier, writing for the monthly print publication, the newspaper’s weekly e-newsletter, website and staff blog. She helped build the Courier's social media presence and enhanced the paper’s community engagement by helping to plan several events.

Earlier in her career, Kotlarz Knapp worked for the Greece Post, where she created the paper’s health care and religion beats. She also brings experience writing for Batavia’s Daily News, the Syracuse Newspapers and the Smithsonian Institution.

From 2009-2014, Kotlarz Knapp led a crew of family and friends in planning the annual Kotlarz Classic, a memorial golf tournament that raised nearly $25,000 in funds to help families struggling after the death of a parent. That money is now part of the Kotlarz Fund for Families, a permanent fund at the Rochester Area Community Foundation that gives small grants to charities that help grieving families.