Why Healthi Kids built a pop up park for adults 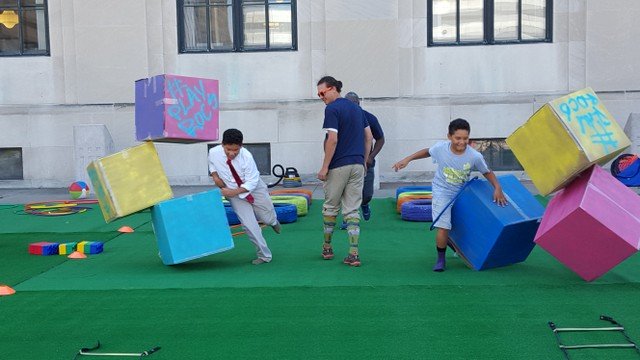 On Friday, September 18, 2015 Healthi Kids participated in an international movement that brings attention to how Rochester can use public space differently – Park(ing) Day! The initiative transformed the area in front of the Rundel Memorial Public Library downtown into a giant pop up playground for adults and kids of all ages.

What is Park(ing) Day?

Park(ing) day is an international movement that's celebrated in 162 cities and 65 countries around the world. Park(ing) day brings together community members, students, and designers to transform parking and public spaces into temporary parklets. Parklets are created by turning curbsides and parking spaces into public parks and are popping up across the country as a way to promote green space and increase foot traffic for businesses.[1]

Why a Pop Up Park?

Healthi Kids believes in the power of play. Play is important for the physical, social and emotional health of all kids. It supports academic achievement, prevents chronic diseases and promotes life-long healthy habits.[2],[3],[4]

Since 2007, Healthi Kids has been working to improve play in Rochester. Playability plans were conducted in five neighborhoods in the city to ask the question “where do children play?” and “how can we improve the environment to support play in our neighborhoods?”. Working with community members and families, the plans show where play is happening, where residents wish play was happening, and what our community could do to make play better for everyone.[5]

The studies showed that kids just don’t have time to be kids and play. In the community, 60 percent of families say the lack of safe places to play is a serious problem[6]; and barriers like crime, traffic and safety consistently emerge as reoccurring themes[7]. At school, kids are missing out on play too and on average only receive 7-12 minutes of daily recess.[8]

To turn the community’s attention back to play, Healthi Kids turned the area in front of Rundel Memorial Library into a giant park to highlight ways we can transform Rochester into a Playable City.

What is a Playable City?