Last year’s Health Impact Assessment of the Genesee Valley Greenway documented how the 90-mile multi-use trail promotes community wellness. To expand those health benefits, the report called for infrastructure improvement to ensure people with disabilities can access the trail.

In August, Gov. Andrew M. Cuomo announced that the Ralph C. Wilson Jr. Foundation would give an initial $2.5 million grant and the state would chip in $4 million to support improvements to the Greenway. The foundation also committed another $2.5 million in the future if the state secures $2.5 million in funding. Enhancements to the Greenway will include trail resurfacing, improved parking lots, signage and more. The state’s funding is part of its Health Across All Policies initiative, and the trail resurfacing is being funded to improve recreational opportunities for people with disabilities. 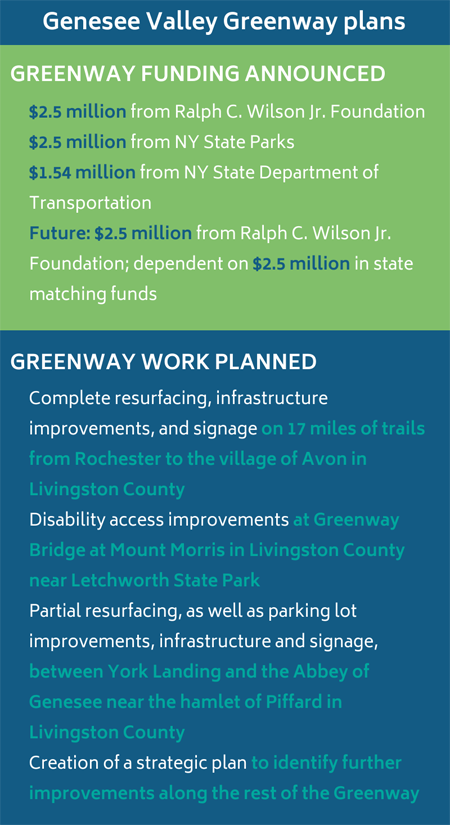 Genesee Transportation Council Director James Stack said the funding will expand a recently-approved project to resurface 6 miles of the Genesee Valley Greenway from Scottsville to Chili that is consistent with the Genesee Transportation Council’s Regional Trails Initiative to promote active transportation. The expanded project will resurface 17 miles of trail from Rochester to Avon. He said the health impact assessment was key in advancing the Greenway projects.

"I am pleased to see many of the recommendations being incorporated into this project,” Stack said.

The funding also supports the creation of a strategic plan to identify additional improvements along the rest of the Greenway. This work will help promote use of the Greenway, which was originally the path of a canal and later a railway line through Monroe, Livingston, Wyoming, Allegany and Cattaraugus counties.

"As the health impact assessment of the Greenway documented, this gorgeous trail is already a shot in the arm for community wellness,” said Wade Norwood, CEO of Common Ground Health. “Now, with these critical new upgrades, folks of all abilities will be able to access the Greenway for walking, biking and other activities proven to reduce chronic illness and improve mental health.”