Lack of health insurance is often deemed the #1 challenge that low-income residents face in accessing medical treatment. But a  white paper released by Common Ground Health found that for Rochester’s most vulnerable populations, other barriers are equally daunting.

“The findings from this study are cause for celebration and rededication,” said Albert Blankley, director of research and analytics for Common Ground Health. “The good news is that the Affordable Care Act has cut the percentage of adults in Monroe County who lack health insurance by half. The sobering reality is that in high poverty neighborhoods, even residents with medical insurance are falling through the cracks.” 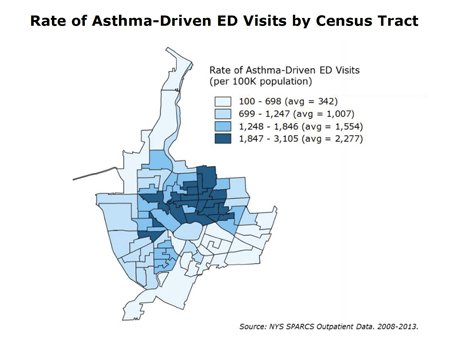 Asthma related emergency department visits were nearly three times higher in the high poverty focus area than in the rest of Rochester, even though most residents were covered by health insurance.

The white paper cites estimates showing that from 2011 to 2015, Rochester’s uninsured rate fell from 10.8 to 5.7 percent. This decrease was driven in large part by the ACA which expanded the availability of Medicaid and added income-based subsidies to support purchase of private individual policies, according to the paper.

“Increasing access to coverage is a tremendous plus for individuals and our community,” said Sister Christine Wagner, executive director of St. Joseph’s Neighborhood Center and Co-chair of the Partnership for Access to Health Care (PATH), the advisory committee that helped frame the study. “When residents have health insurance, they are less likely to put off preventative care and cancer screenings, interventions that catch problems early when they are easier and less expensive to treat," she said.

Beyond insurance, the researchers found that other constraints of living in poverty continue to create formidable hurdles to care: people don’t have a ride, they don’t have child care or they can’t afford to take time off from work for medical appointments. Such challenges can make getting to the doctor or following demanding treatment protocols too difficult, the study reported.

To understand what lies behind these disparities, the paper explored how residents in these neighborhoods accessed medical care based on data from national and local sources, including insurance claims data from 2014 to 2015. The report used asthma as a case study for understanding the management of chronic disease, pointing to the focus area’s alarming rate of asthma-driven emergency department visits, which is 3 times higher than in the rest of the city. Trips to the ED and hospitalizations for asthma are considered preventable, because with proper outpatient treatment, such acute episodes should be avoidable.

Primary care visits were even higher for insured individuals diagnosed with asthma. Of this group, claims data show that 95 percent of children and 87 percent of adults visited their primary care physician between 2014 and 2015.

The bad news is that even with medical coverage and primary care, too many adults and children in high poverty neighborhoods still suffer preventable health emergencies. To find our why, the researchers asked residents. Through 260 first person interviews conducted in 2016 by the Rochester Research Group, the study uncovered several key challenges. Many patients have difficulty finding a doctor who accepts Medicaid, others lack transportation or cannot juggle caretaking responsibilities and work schedules for medical visits.

“I’m disabled so I can’t use the bus system, and some of my doctors are kind of far away, like my cardiologist,” explained one respondent. “People in my world all work, so they couldn’t drive me.”

For patients with asthma, the data tell an even more complex story. As with other chronic conditions, keeping asthma under control often requires specialty care. But children with the respiratory illness from the five ZIP codes were 71 percent less likely to have seen an allergist or immunologist than children in the rest of the county and adults were 61 percent less likely to have specialty care.

“It’s concerning to see a child struggle with a chronic condition,” said Kim Wynn, a program manager for the Navigator Program funded by New York State of Health and PATH Co-chair. “Identifying that specialty care is a missing element in the care pathway and is an important step to preventing many of these medical crises,” she said.

“It’s critical we continue to work together in providing awareness to ensure individuals in our community get the care they need to live and stay healthy,” she said.

PATH has worked to identify barriers to insurance coverage since 2000. In response to this research, the group recently changed its name from Partnership on the Uninsured to reflect its new broader focus on all care barriers.