Kids walk for the right to play in a safe neighborhood 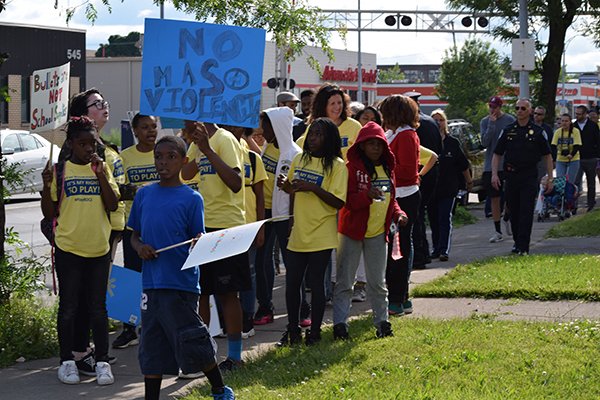 Students from Cameron Community Center are shown here walking in the 2018 Peace Walk.

Partnering with the Healthi Kids Coalition, an initiative of Common Ground Health, and the Lyell/Otis Neighborhood Association, the kids are hosting the walk to call for a safer neighborhood. The children will lead their friends, community members and family in their daily route along Cameron St., Otis St., and Lyell Ave. Marchers will wear t-shirts with a famous Frederick Douglass quote that say, “It is easier to build strong children than to repair broken men.” Following the march, children ages 5-12 years old will share their thoughts on how violence in their neighborhoods has affected them and why it is important for them to take a stand for peace.

“Our students play a critical role in this movement because it’s their voices that get the attention of government officials in a way that adults can’t. They know that standing up for what they believe in and advocating for themselves and their needs is the best way to see change in their community,” said Damon Butler, youth assistant ar Cameron Community Ministries.

The children of Cameron Community Ministries are all too familiar with violence in their neighborhoods—children who live in the Lyell/Otis neighborhood experience a violent crime rate that is 60 percent higher than the rest of the city and 6.5 times higher than the rate in the suburbs. The walk began in 2013 after a string of shootings in the neighborhood caused staff to bring students in from the playground during the after school program. Kids and staff decided they wanted to do something in response. They made signs that read, “Keep us safe, let us play” and wrote poems about why peace is important to them. Wearing t-shirts that called for peace, the kids marched down Lyell Avenue, and the annual Peace Walk was launched.

Studies from Healthi Kids and Common Ground Health demonstrate that crime and neighborhood perceptions of safety are key barriers to walking, biking and playing in several city neighborhoods. Research shows play is vital to the physical, social and emotional development of children.

“Seven years later, our commitment to providing advocacy training to the Cameron Community Ministries and supporting its cause is stronger than ever because we believe every child has the right to safe and supportive environment to learn, grow, and play,” said Jenn Beideman, advocacy manager at Common Ground Health. “By raising awareness and working together to improve neighborhood safety, we are addressing one of the main barriers to whole child health and creating healthy, equitable communities where children can learn and develop important skills for success.”