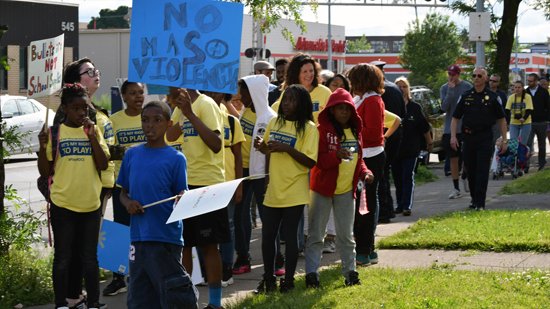 Kids with Cameron Community Ministries marched for peace in their neighborhood and safe and accessible play spaces on June 6, 2018.

The children of Cameron Community Ministries’ After School Program marched today for peace and for their right to play in a safe neighborhood. Hosting their 6th annual Peace Walk in the Lyell Otis Neighborhood, children at the Rochester nonprofit are all too familiar with violence on their streets.

Partnering with the Healthi Kids Coalition, an initiative of Common Ground Health, and the Lyell Otis Neighborhood Association, the kids hosted the annual walk to call for a safer neighborhood.

“Today our students are standing up for what they believe in, and learning how to be an agent of change in their very own community,” said Cameron’s Youth Programs Director Katherine Sime. “Your voice matters no matter how small or how young you are. Today, we hope the message of our young people is heard loud and clear: Our kids want safer neighborhoods to grow up in, and safer places to be able to play outside.”

The walk began in 2013 after a string of shootings in the neighborhood caused staff to bring students in from the playground during their after school program. Kids and staff decided they wanted to do something in response. They made signs that read, “Keep us safe, let us play” and wrote poems about why peace is important to them. Wearing t-shirts that called for peace, the kids marched down Lyell Avenue, and the annual Peace Walk was launched.

Six years later, with the help of the Rochester Police Department, the children led their friends, community members and family in their daily route to their after school program to highlight “a day in their shoes” to participants. Marchers wore t-shirts saying “Keep my neighborhood safe. It’s my right to play!” After the march, children ages 5-12 years old shared their thoughts on how violence in their neighborhoods has affected them and why it is important for them to take a stand for peace:

"I stand for peace because I hate shooting. I hear gun shots. I need a safe place to play outside because I am afraid I will get shot by a stray bullet." - Analiz - 11 years old

"I stand for peace because I want the violence to stop and a safe place to play." - Essence, 6 years old.

Studies from Healthi Kids and Common Ground Health have demonstrated that crime and neighborhood perceptions of safety are key barriers to walking, biking and playing in several city neighborhoods. Research shows play is vital to the physical, social and emotional development of children. The children of Cameron Community Ministries are all too familiar with violence in their neighborhoods – children who live in the Lyell/Otis Neighborhood experience a violent crime rate that is 60 percent higher than the rest of the city and 6.5 times higher than the rate in the suburbs.

“Every child has the right to play, but issues of neighborhood safety across the city deter parents from letting their kids play outside,” said Jenn Beideman, Advocacy Manager at Common Ground Health. “When the youth planning team approached Healthi Kids to ask if we could provide them with advocacy training, we were glad we could support them in their cause. By raising awareness and working together to improve neighborhood safety, we are addressing one of the main barriers to play and creating healthy, vibrant communities.”