Among the more than 16,000 miles of trails in New York State, the Genesee Valley Greenway State Park—a 90-mile corridor spanning from Rochester to almost the Pennsylvania border—is one of the longest, most scenic stretches.

It is a natural resource perfect for hiking, walking, biking and other physical activities that research shows can help lower rates of obesity, high blood pressure, stroke and cancer. 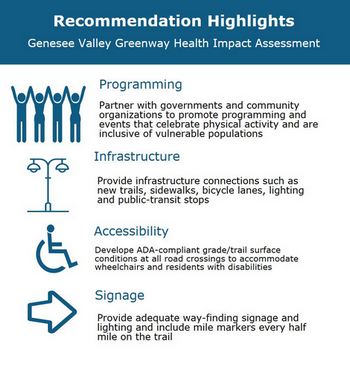 And it has tremendous potential for encouraging more people to improve their health, according to a new Health Impact Assessment of the Greenway.

Produced by Common Ground Health and the Genesee Transportation Council, that study took an extensive look at how rigorous data analysis and broad community involvement could inform decisions about health before they’re made.

“HIAs are a new and different lens that local governments bring to decision making,” says Wade Norwood, CEO of Common Ground Health.  “They bring together data and stakeholders to think about the potential effects of a proposed policy, plan, program or project on not just the environment, but the health of a population.” 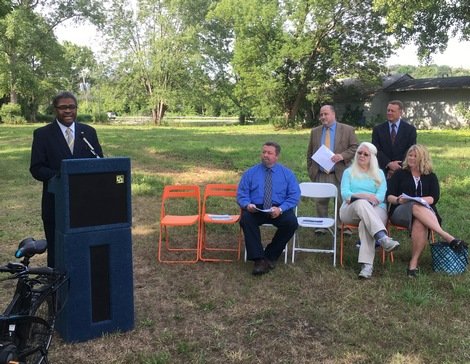 Greenway enthusiasts and officials from partnering organizations gathered in Scottsville July 30 for the public release of the Greenway HIA. Click on this image for photos and remarks from the event.

According to Randy Simons, spokesperson for New York State Parks, the study’s recommendations will raise awareness and further champion the health benefits of the Greenway, which passes through woodlands, wetlands, river and stream valleys, farmlands, glacial gorges and historic villages across Monroe, Livingston, Wyoming, Allegany and Cattaraugus counties.

“When you’re part of an agency that’s responsible for the stewardship of the outdoors, you’re always touting the importance of recreation, exercise and exploration,” he says. “But it’s even better when you have multiple sources speaking to the same mission.”

To promote more physical activity along the Greenway, the study recommended analyzing data from newly installed trail counters, in part to document the relationship between trail use and trail conditions. New trails, sidewalks, bicycle lanes and public-transit stops would help attract new users, as would developing ADA-compliant grade/trail surface conditions at all road crossings.

Recommendations also included: partnering with governments and community organizations to promote programming and events that celebrate physical activity and are inclusive of vulnerable populations; designing environments that encourage formal and informal social interaction; and reducing risk of injury with adequate lighting and way-finding signage.

That last one is key for Norwood, who says way-finding signage would be transformative “for guys like me who have an incredible ability to get lost when I’m out in the woods.”

“The Genesee Valley Greenway is an asset for our region and beyond,” says Genesee Transportation Council Executive Director James Stack. “We want to help raise awareness that it is in our back yard, and gives people an opportunity to get where they are going while improving their health at the same time.”