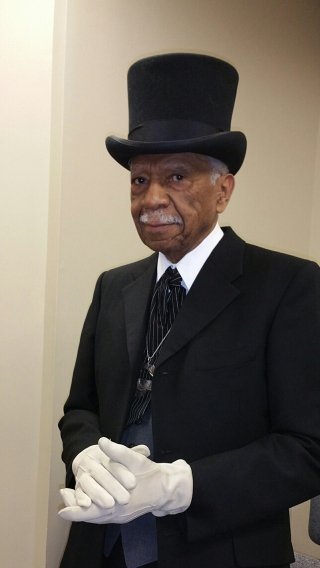 Community leader and actor Dr. David Anderson brought his blend of master storytelling and historical reenactment to the FLHSA Feb. 25, 2015 as part of the agency’s “lunch and learn” diversity programming. In his role as Frederick Douglass, Dr. Anderson described the wrenching loss of loved ones that was part of slavery and the risk of abduction that even free men and women of color endured before the Civil War.

Later, Dr. Anderson talked about a more recent threat to the health and well-being of African Americans: lead poisoning. He recalled the early days of the campaign to reduce exposure to lead in Rochester. In the 1960s, Dr. Anderson worked with a group of young African Americans connected with the Urban League. The teenagers went house to house collecting and testing flaking paint for lead and they found innovative ways to educate the community about the dangers of lead exposure. He recalled the indifference of governmental officials to the problem and the difficulties black families encountered getting their children diagnosed and treated for lead poisoning. But those early efforts saved lives, he said.

Dr. Anderson became a champion of eradicating lead paint poisoning and a founding member of the agency-staffed Coalition to Prevent Lead Poisoning. His efforts and others have helped reduce the number of children reported with lead paint poisoning by more than 85 percent in the last decade.