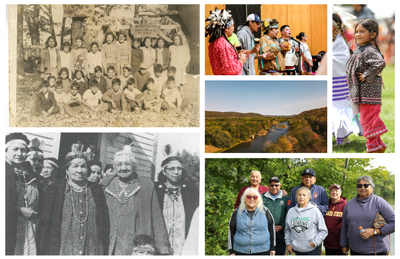 It also made plain for public health workers where they lacked relationships and collaboration.

As Common Ground Health worked to reach out to populations in 2021 to share work about COVID vaccines, staff found there were groups living locally with whom they didn’t have existing relationships. For instance, they didn’t have any leaders of local Indigenous communities in their databases and no Indigenous community representatives were taking part in existing coalitions and workgroups.

In assembling a group of Indigenous professionals to help inform and guide outreach, Common Ground staff began identifying how much they didn’t know about health outcomes of people indigenous to the land that now makes up the United States. Staff also learned about some of the historical traumas experienced by Indigenous populations from government agencies through boarding schools, forced relocations and forced sterilizations, to name a few. It became clear that more work to address Indigenous health disparities locally needed to be done, outside of the initial focus on COVID-19.

For instance, during the first 7 months of the COVID-19 pandemic, Indigenous populations were sickened with COVID at 3.5 times the rate of Whites, according to the Centers for Disease Control and Prevention. But locally, statistics on Native populations during the pandemic have been hard to find due to a lack of data and reporting stemming from a lack of systems to accurately account for this information.

In response, several local Native advocates have generously given their time to help improve collaboration and address the needs of Native populations. Next the group will be taking part in a listening tour, where they will interview local Indigenous stakeholders and residents to better understand the factors affecting Indigenous health outcomes in the Finger Lakes region. Long term, the advocates have called for the launch of an Indigenous Health Coalition if there is interest from local Native populations.

“At the very least, this work is overdue,” said Native advocate Ronalyn Pollack, CHHC, AADP (Mississaugas of the Credit First Nation/Six Nations of the Grand River). Pollack, along with Dean Seneca, MPH, MCURP, (Seneca) CEO and founder of Seneca Scientific Solutions, and Todd Michel Waite, BA, MA (Seneca), Program Officer at Max and Marian Farash Charitable Foundation, have been advising Common Ground in its outreach with Native populations. They also served as panelists for an Indigenous forum around the COVID vaccines.

Common Ground Health is seeking input from the Indigenous community in the development of the forthcoming survey to update the 2018 My Health Story survey; community members are reviewing questions for cultural appropriateness and relevance.

The advocates note that the work will not just be specific to the Haudenosaunee people, (who are the original residents of the Finger Lakes region) but will encompass all people with Indigenous heritage who are living in the area.

“We are reaching out to find those Indigenous people living throughout the community who are interested in improving the health of Indigenous families in the community,” Seneca said.

Dean Seneca is uniquely qualified to advance this work; he previously was a senior health scientist at the CDC’s Center for State, Tribal, Local and Territorial Support and he is an adjunct professor of the SUNY University at Buffalo’s School of Public Health and Health Professions where he teaches a course on Indigenous health disparities. In addition to being part of the team of advocates leading the work, Seneca is serving in a consulting role with Common Ground Health to identify available data sets that can shed light on Indigenous health. Seneca also provided a training on Indigenous health disparities to Common Ground’s staff in June of 2021.

A big part of the work is building trust by following through with commitments, the Indigenous advocates say.

“This comes with humbleness,” Waite said. “It’s by us for us. Common Ground is there as a willing partner to help grow this.”

“So many times throughout history, similar initiatives have been promised, and then do not come to fruition. Building trust with and learning from our local Native communities is our top priority,” said Hannah Shippee, a program coordinator with Common Ground Health, who has been the organization’s key liaison with the Indigenous community. She noted that Common Ground is committed to maintaining relationships for the long term, and understands how important listening to Indigenous families’ experiences and recommendations for change will be to informing this work.

The group also hopes to reach out to the more than 13,000 people with Native heritage who live in the Finger Lakes region, the majority of which live in Monroe County. The goal of the work is to make the Indigenous community visible to ensure it isn’t left behind or forgotten by others. The advocates also note that traditional ways can and must be an asset to the movement towards health equity, including rediscovering language, cultural practices and traditions that lead to healing.

Common Ground officials say they are committed to supporting these efforts long term.

If Indigenous people want to learn more or take part in the listening tour, they should reach out to Hannah Shippee or call 585-224-3152.