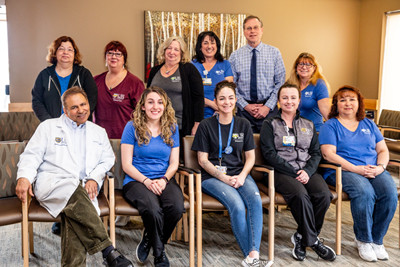 Despite this challenge, the Rochester Regional Health practice has a blood pressure control rate of 85%, including for those from low socioeconomic households. That unusually good rate matches the target set by Common Ground Health, which tracks hypertension control rates in nearly 200 practices across the Finger Lakes.

And the achievements don't stop there for a practice that draws from a fairly large geographic area, much of it rural. For example, the difference in blood pressure control rates between high socioeconomic status patients, who generally are easier to treat, and low socioeconomic status patients is usually about eight percentage points. At Finger Lakes Medical Associates, the difference is two percentage points.

There is no one key to success. What has driven superior results for Finger Lakes Medical Associates has been a combination of experience, collaboration, and a culture that puts patients first.

“We have a population that really needs reminders, and when they don't show up we try to contact them to reschedule,” says Dr. Mark Ryan, who has worked in this location since 1988. Two of his partners have been there even longer.

That amount of time together has created a highly effective team, one buoyed by the multi-specialty nature of the practice, in which cardiologists, nephrologists, and other physicians are easily accessible for curbside consults.

An essential member of that team has been a care manager responsible for identifying barriers to care—such as lack of transportation or access to food—and promoting population-based medicine.

The practice also credits an innovative feature in its electronic medical record system that flags abnormal blood pressure readings with a pop-up window.

Explains Dr. Arthur Equinozzi, who has been at the practice since 2001: “In years gone by, we may have been more inclined to say, ‘Maybe you're nervous today. Let's re-check it again next time.’ But I think we're being much more attentive and aggressive and saying, ‘This pressure is high. We need to address it and get you to a safer level.’”

Even when pressed for time, Equinozzi and his colleagues emphasize the value of taking an extra minute to explain the importance of adhering to agreed-upon medical treatment plans and necessary lifestyle changes aimed at preventing long-term health problems. When patients have a better understanding of what they're facing, they seem to take a more active role in their care.

“If I do my job well, nothing happens,” says Dr. Ryan. “They don't have a heart attack, they don't have a stroke, they don't go into kidney failure. It’s about prevention. It’s not as glamorous as what you see on TV, that saved-from-the-brink drama, so it's nice to have some reinforcement that what you're doing is making a difference.”