Seven area colleges highlighted the benefits of creating tobacco-free campuses during a May 3, 2017, news conference.

Almost all lifelong smokers begin using tobacco by or during the college years, according to the Centers for Disease Control. And, once begun, that addiction is deadly. Smoking is the leading cause of premature and preventable mortality, responsible for about one in five deaths annually in the United States.

So banning smoking on campuses, like similar restrictions in restaurants and other venues, provides an excellent public health opportunity, encouraging users to quit and protecting other students and staff from the dangers of secondhand smoke.

But kicking the tobacco habit at institutions of higher learning takes commitment and support. Changing a campus tobacco policy requires backing from leadership, buy-in from students and staff, and often approval from faculty. Pushback can come from many directions, including international students for whom any kind of smoking ban can be a shock.

Despite these challenges, a collaborative campaign in Rochester, New York, shows how one community was able to recruit not one, but seven colleges and universities to commit publicly to restricting smoking on their campuses. With the backing of business leaders through the Greater Rochester Chamber of Commerce’s health care planning team, a group of committed volunteers provided the strategy and momentum needed to make tobacco-free campuses the norm for nearly 60,000 students and more than 10,000 college employees in Monroe County.

Their success provides an innovative model for business-led health improvement. “This effort shows how business leaders can help bring about significant change—even without money—when the community rallies together for a common cause,” said Cynthia Reddeck-LiDestri, vice president of health and wellness at LiDestri Food and Beverage and chair of the Million Hearts committee that spearheaded the no-smoking campaign.

It starts with a conversation

A retired cardiologist, Reddeck-LiDestri is deeply committed to heart health through effective education and prevention strategies. She has served on the Rochester Chamber’s High Blood Pressure Collaborative for more than a decade, promoting worksite wellness and recently helping to form the group’s Million Hearts committee. But it was in her role as a Nazareth College board trustee that the higher education campaign first emerged.

“I began to think about whether we were ‘walking the walk’ at Nazareth when it came to tobacco,” she said. “I talked to Nazareth College President Daan Braveman about the importance of moving toward a no-tobacco policy.”

Braveman liked the idea and tasked his dean of the School of Health and Human Services, Brigid Noonan, with leading the effort to create a non-smoking policy for the campus.

Encouraged by Nazareth’s response, Reddeck-LiDestri brought the idea of approaching other colleges to the Million Hearts committee, whose membership includes representatives from businesses, higher education and health care, along with such nonprofits as the American Heart Association, Smoking & Health Action Coalition, American Lung Association and the Center for Community Health at the University of Rochester. The committee had already explored the “ABCS” of risk management for stroke and heart attack: take aspirin when advised to do so by a doctor, control blood pressure, manage cholesterol and stop smoking. Since the team had no budget of its own, the group had decided to focus on smoking by partnering with other groups. Advocating for tobacco-free campuses turned out to be a perfect match.

Nazareth President Daan Braveman advised the committee to adopt a collaborative strategy. He suggested that peer support among the colleges and universities could be a powerful incentive and that the largest institution and the region’s biggest employer—the University of Rochester—could help lead the way. University of Rochester President Joel Seligman agreed and signed on immediately.

The seven colleges that eventually came on board were at different points in their smoke-free journey. Roberts Wesleyan had banned tobacco since its inception in 1866, while the College at Brockport went smoke-free in 2011 and Monroe Community College in 2015. Rochester Institute of Technology and the University of Rochester were in the early stages of implementing their policies.

By contrast, St. John Fisher was just beginning. After signing on to the collaborative effort, Fisher created a smoke-free task force to solicit feedback from its campus community on existing policies and how the college might transition to a tobacco-free environment.

To move the process along and show solidarity among the colleges, a plan was put in place to convene the seven schools at a public event to coincide with national Kick Butts Day! on March 15, 2017, a national day of activism that empowers youth to stand out, speak up and seize control against Big Tobacco.

Unfortunately, a winter storm delayed the gathering, but the new date, May 3, 2017, fell appropriately during Clean Air Month, National Stroke Awareness Month and National High Blood Pressure Month. Hosted by then RIT President Bill Destler, the press conference provided an opportunity for the schools to highlight the benefits of creating an environment that discourages smoking.

“The reason behind our effort was simple: to provide a healthy and safe learning environment for employees, students and visitors,” said MCC President Anne Kress. “Smoking is a leading cause of preventable death and a host of other conditions, including coronary heart disease, stroke and cancer. Despite these risks, numerous studies show tobacco use remains a serious public health issue – particularly for young people.”

The presidents noted that since nearly 100 percent of smokers will have tried smoking by the age of 26, college and university campuses are a critical target for tobacco prevention and cessation efforts.

Some of the colleges’ policies call for a phased approach in which smoking will be allowed only in designated areas. Other college policies set deadlines for becoming completely tobacco-free. A challenge to adopting these policies, the college presidents added, is the growing use of electronic cigarettes, snuff and hooka pipes. As a result, some of the local colleges are incorporating these products into their tobacco-free policies as well.

According to Reddeck-LiDestri, this effort never could have gotten off the ground without the spirit of collaboration that exists in local health care. She credits the Million Hearts group, the colleges, Greater Rochester Chamber of Commerce staff and Common Ground Health for putting together an initiative that had no money and instead relied on advocacy and leadership. 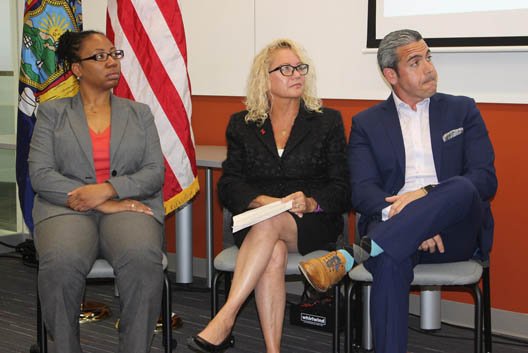 Annalisa Rogers, director of the Smoking & Health Action Coalition at the American Lung Association of the Northeast, Cynthia Reddeck-LiDestri, vice president of health and wellness at LiDestri Food and Beverage and chair of the Million Hearts committee, and Marc Natale, executive director, Greater Rochester and Buffalo Niagara Region at the American Heart Association, helped to spearhead the no-smoking campaign on local college campuses.

“A lot of volunteers are working to help make our community healthier, and there are many efforts in our community focused on tobacco,” said Reddeck-LiDestri. “Many local worksites and companies are tobacco-free. This effort will supplement existing efforts and have a positive impact on the health of the greater Rochester community, as it will benefit tens of thousands of college students and campus employees.”

“We are very grateful to have the higher-ed leadership that we have in the Rochester area,” Reddeck-LiDestri added. “It is deeply gratifying to learn that local colleges are committed to the health of their students and of our community.”

The Million Hearts team hopes to provide an ongoing platform to help keep college students and staff healthier and is discussing what they will do to coincide with Kick Butts Day! in 2018.

“Ideally, it would have been great to have all college campuses go tobacco-free in one step,” said Reddeck-LiDestri. “But we learned that each college was at a different place when it came to smoking policies. The good news is now each one either has a tobacco-free policy or is well on the way toward one. This is good for the colleges, for the students and for the environment.”