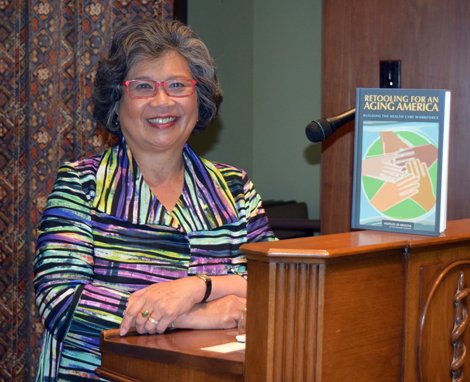 Jennie Chin Hansen told a Rochester group that the medical community needs to enlist and train all those who come into contact with seniors, including family caregivers and non-medical professionals.

Recognizing that there will be too few geriatricians to meet the needs of our growing senior population, the medical community needs to train and make use of the talents of all those who come into contact with seniors, including family caregivers and non-medical professionals, said renowned geriatrics expert Jennie Chin Hansen.

The former CEO of the American Geriatrics Society and former president of AARP also applauded efforts to empower entry level medical professionals to move up career ladders and cited new technologies that could help close gaps in care.

Speaking March 30 at the Rochester Academy of Medicine as part of the work of the Regional Consortium on Health Care Workforce, Chin Hansen said that by 2050, 13.8 million people in America will have Alzheimer’s, but there will only be one geriatrician per every 10,000 adults, if current trends hold.

Chin Hansen urged young people to consider geriatrics as the field of the future, citing research showing a more than 250 percent increase in the percent of those 85 and older by 2060 -- an increase that she called a “blessing as well as a challenge.” Over the next 40 years, the percentage of seniors over 85 in the population is projected to increase at a far faster rate than other age groups, according to the AARP Public Policy Institute.

To counteract this trend, family caregivers should receive better training to be more effective, Chin Hansen said. Currently, nearly 46 percent of informal or family caregivers are providing medical/surgical tasks without adequate training. She applauded a new New York law taking effect at the end of April 2016 that will require hospitals to involve and train family caregivers in post-discharge care, such as giving multiple medicines and dressing wounds.

The new law is a step in the direction of preparing family caregivers to enable seniors to stay in their homes, Chin Hansen said. Family caregivers could also be trained in certain medical tasks via video courses or by retired nurses, she said.

At On Lok, where Chin Hansen served for more than 25 years in a variety of roles, including executive director, everyone who came into contact with clients shared vital information about clients’ wellbeing.

“Our drivers would pick up knowledge when they pick up somebody to come to our site,” Chin Hansen said. “They could tell that their head was really wobbly or something, or they could tell that they weren’t eating their meals at home – the meals we delivered. They’d report that. And the team there would pick it up and act on that. And it makes you feel that what you are doing is a contribution and makes a big difference to the work.”

Training the geriatric workforce of the future

To address projected provider shortages in the future, Chin Hansen called for a greater focus on geriatrics training in nursing, pharmacy and medical school programs. Even though job prospects and earnings are strong for geriatrics specialties, workforce shortages persist. Chin blamed “ageism” in part for dampening the popularity of geriatrics as a field and called for efforts to combat that prejudice.

To help address worker shortages, Chin Hansen pointed to a collaborative effort in Detroit. Two competing health care systems teamed up with a local community college to create a job ladder and curricula aimed at preparing workers to advance in their career and in their training.

“They have come together with the local public education system to start thinking about the kind of jobs that are going to be available in the community and helped design this from the ground up. It has been highly successful to bring two competitors together for a shared purpose and to bring jobs,” Chin said.

Creative use of technology

Innovations in technology may also help address provider shortages, Chin Hansen said. She cited the work of Max Little, an applied mathematician at MIT, who helped develop technology to test for Parkinson’s disease using voice recordings. The voice-based tests are as accurate as clinical tests, can be done remotely, are high speed and low cost. The University of Rochester is now collaborating on the Parkinson’s Voice Initiative. Little’s work may ultimately supplement the work of neurologists, who are in high demand, Chin Hansen said.

She also cited new devices that are being developed to improve medication adherence and electronic stuffed animals and dolls that have been used to calm patients with dementia.

Chin Hansen said she is involved with a startup that is developing an evidence-based set of algorithms for patient care to help direct care workers in homes improve outcomes.

“This is an opportunity for doing the right thing,” Chin Hansen said. “For me, I’ll posit that doing the right thing is thinking about our populations’ well being. Helping people live their best lives, live it safely, and when they get off the rails, is there a way we can get them back on the rails safely and quickly?”

Chin Hansen served for nearly 25 years as research associate, deputy director, director and executive director of On Lok Inc., a nonprofit that pioneered a model of integrated and comprehensive medical and community-based services for older people with complex medical needs in San Francisco. On Lok became the prototype for the Program of All Inclusive Care to the Elderly (PACE), a Medicare and Medicaid program that operates in more than 30 states.

In addition to serving top spots at the American Geriatrics Society and AARP, Chin Hansen was named one of 50 top influencers on aging in 2015 by PBS’s Next Avenue. In 2011, she completed a six-year term as a federal commissioner of the Medicare Payment Advisory Commission (MedPAC).