African Americans Can Do More to Reduce Tobacco-Related Illnesses 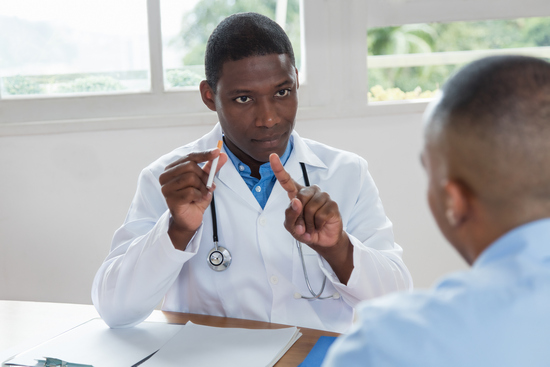 You may be aware that smoking is the leading cause of lung cancer, but did you know tobacco use is linked to 16 other cancers? These include stomach, bladder, kidney, pancreatic, breast, colon, and rectal cancers. Additionally, 30 percent of all cancer-related deaths occur from secondhand smoke exposure, and 80 percent of lung cancer-related deaths are a direct result of firsthand tobacco use.

The Centers for Disease Control and Prevention reports that more than 450,000 people die each year from tobacco use, including cigarettes, cigars and chewing tobacco. While New York state’s Clean Indoor Air Act and taxes on tobacco products have helped reduce the prevalence of smoking and the number of tobacco-related deaths, more than 110,000 people in Monroe County still face an increased risk of becoming sick, or dying from cancer due to tobacco use.

For African American communities in particular, tobacco-use rates are exceptionally disturbing, as 19.6 percent identify as regular tobacco users in Monroe County, compared to 10.6 percent of whites. Along with increased cancer risk, there is also an increased risk for developing heart disease, or stroke.

Minority groups, people who live in or near high-poverty neighborhoods, identify as LGBTQ, have mental health-related concerns, or have a disability have a greater likelihood of tobacco use than other groups. Hence, they also have an increased risk of cancer-related illnesses, or death.

In our community, cancer is the leading cause of death, which is driven by the high rate of lung cancers. The African American Health Coalition (convened by Common Ground Health) is working diligently to improve the health of the African-American community. The AAHC believes that together, we can reduce the number of cancer-related illnesses, and death due to tobacco in our community.

We encourage you to:

1) Educate yourself and others on the dangers of tobacco use. Share your information with those who are ready to hear your message.

2) If you have a loved one who currently smokes, be their champion and lovingly encourage them to quit when they are ready. Quitting smoking decreases the risk of developing cancer by 40 percent.

3) Join coalitions, and advocate for local government leadership to change city policies that reduce targeted marketing to youth and other vulnerable populations.

4) Talk to local retailers that sell tobacco products about placement of tobacco advertising. The tobacco industry disproportionately advertises and promotes tobacco in urban markets with high populations of African Americans.

Tobacco products cost New Yorkers nearly $10.4 billion annually. Overall, we know that we can reduce incidences of cancer, and the costs associated with it through education and effective policies.

While the rates of cancer have lessened, due to the decreasing lung cancer rates of men, we can do more. By reducing tobacco use, we will not only save money, but most importantly, we will improve the health of our family members, friends and community by reducing their risk of getting cancer and other illnesses.

Annalisa Rogers is the director of the Smoking & Health Action Coalition (SHAC) at the American Lung Association of the Northeast. She is a member of the African American Health Coalition, and considers herself to be a lifelong community advocate. Her education, career path and history in nonprofit organizations demonstrate her staunch commitment, and focus on community wellness.