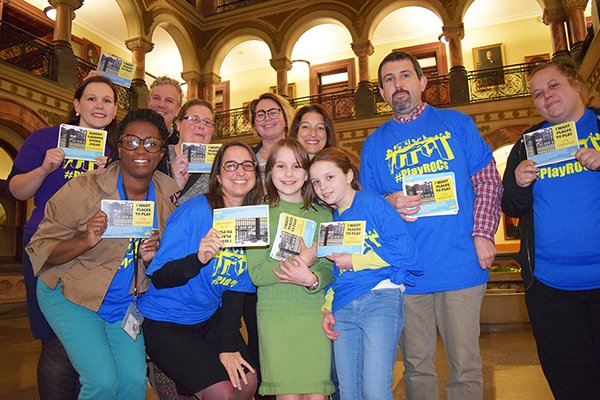 A group of play advocates brought 624 postcards to City Council that shared community members' visions for a more playable Rochester.

Advocates for play urged Rochester’s City Council to put kids first in the city’s comprehensive plan update to ensure Rochester is the best city to live, work and play.

On Nov. 15, community organizers, parents and children from across the City of Rochester shared with City Council their vision for the need for safer, more accessible places to play.

The advocacy effort was led by the Healthi Kids Coalition, an initiative of Finger Lakes Health Systems Agency, as part of the PlayROCs campaign.

Participants delivered to council members 624 postcards that share community members’ visions for a more playable Rochester. The speakers urged City Council include language in the comprehensive plan that supports safer neighborhoods and play spaces; slowing down traffic to ensure all children have safe routes to play; and ensuring children of all ages and abilities have an accessible place to play.

“Play isn’t trivial,” Health Kids’ Policy and Research Associate Jenn Beideman told City Council. “Having play spaces in neighborhoods and in our city is about a quality of life to residents. Children who play every day are healthier, do better at school, have reduced feelings of depression and anxiety, and have stronger social emotional skills. Despite all of these benefits, many children across the City of Rochester do not have safe and accessible places to play.”

Advocates told council that every child in the City of Rochester should have the right to a safe place to play, walk and bike in their neighborhood.

They also noted that:

Democrat and Chronicle Playful road to progress in Rochester